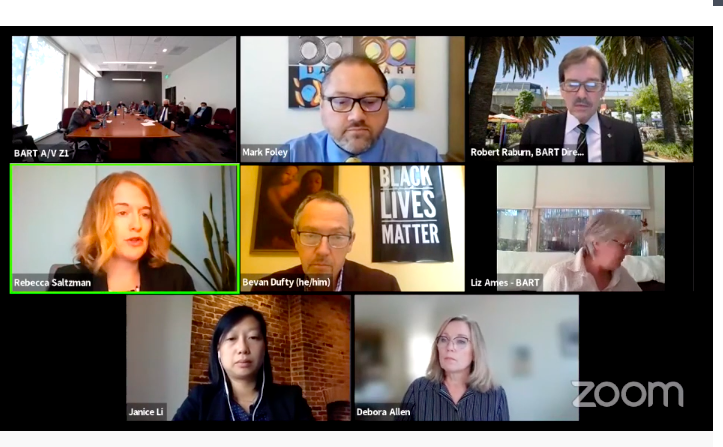 On December 2, the BART board supported a review of the BART Silicon Valley project to assess the current design against the twin-bore alternative studied in the EIR that may be able to deliver better rider experience and safety at lower cost.

Directors Saltzman and Li expressed concerns about the ballooning cost estimates for the current project with a deep single bore tunnel, and the rider experience concerns with the deep tunnel design; and were supportive of an independent cost and design review compared to the previously environmentally cleared twin-bore option. Director Raburn expressed fire and life safety concerns about the single entrance/exit at the SAP Center. In Raburn’s words “we have time to make course corrections. We need to make sure we are moving forward with a project we want.” Board members were interested in a joint meeting with the VTA board to discuss the issues.

VTA’s project director Takis Salpeas made the case that the recent Federal Transit Administration’s recent cost estimate that increased the cost of the project to $9 billion from $6 billion was not a matter of concern, because it was merely a “probabilistic assessment”, although their assessment uses information about projects all around the country, and the FTA assessment of risk determines the overall amount that local project owners need to raise, as the Caltrain electrification project found out when FTA increased the amount of contingency funding that the electrification project partners needed to raise. Instead, Salpeas recommended waiting for two years until the contract bids were in.

VTA project director Takis Salpeas stated that the twin-bore tunnel was not “environmentally cleared” despite the fact that the CEQA and NEPA studies analyzed both the single-bore and twin-bore tunneling methodology options equally. During the meeting, Director Saltzman googled the press release when VTA had announced that both options had been approved in the EIR. FTA had determined that NEPA requirements had been satisfied for the BART Silicon Valley Phase 2 project, including all options analyzed in the Preferred Alternative, including the twin-bore option.

Salpeas noted that the FTA had issued its “Record of Decision” for the single bore deep tunnel. But that decision about which of two fully studied options had been delegated to the VTA board (SEIS/SEIR p2-134-135.)    If the VTA wanted to change direction to another alternative studied in the EIR/EIS, they would need to notify the FTA, but they would be able to do so.

In public comment, advocates from San Jose, San Francisco, San Mateo and Alameda Counties (all the counties BART serves except Contra Costa County), along with think tank SPUR urged the BART board to do an independent cost and design review.   Scott Mace of San Jose used the example of Boston’s Green Line which reduced the cost of the project after getting a full funding grant agreement from the federal government.