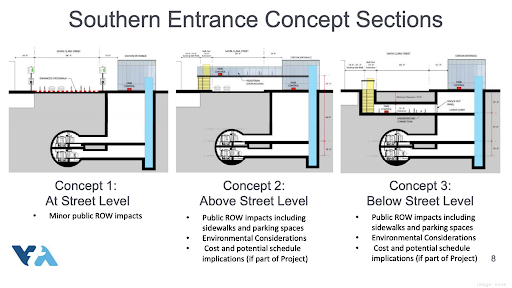 On December 7, multiple public commenters spoke in support of the memo from San Jose Mayor and colleagues seeking welcome improvements to rider experience and urban design including additional station entrances and better transit connections, and urging review compared to the previously studied twin bore design, which would make it easier to solve the problems.

The San Jose City Council supported the Mayor’s memo unanimously, but for the most part did not pick up on the concern that the fundamental cause of the rider access and urban design challenges identified in the memo is the deep tunnel itself. By contrast, earlier in the week, BART board members supported review of the project to assess concerns about the increasing costs estimates and concerns about rider experience and fire/life safety.

Council Member Peralez spoke about wanting a business disruption fund, an additional downtown entrance on the south side of the station. Peralez talked about the need to raise raise additional funding for these improvements. He did not address the concerns that the deep tunnel design itself contributes to the cost of adding station entrances.

Council Member Mahan asked about the possibility to add infill stations in the future, and VTA’s project lead said it would not be possible. This is another limitation of the single bore design.

The Mayor asked staff a question to clarify to the public why FTA’s recent cost estimate which assessed the likely price tag of the project from $6 billion to $9 billion should not be a matter of concern, because FTA’s assessments are probabilistic. However, FTA bases their assessments on experience from around the country. And when it comes to funding the project, FTA’s estimates, including its assessment of the need for contingency against risk, will determine the amount that VTA will need to raise.