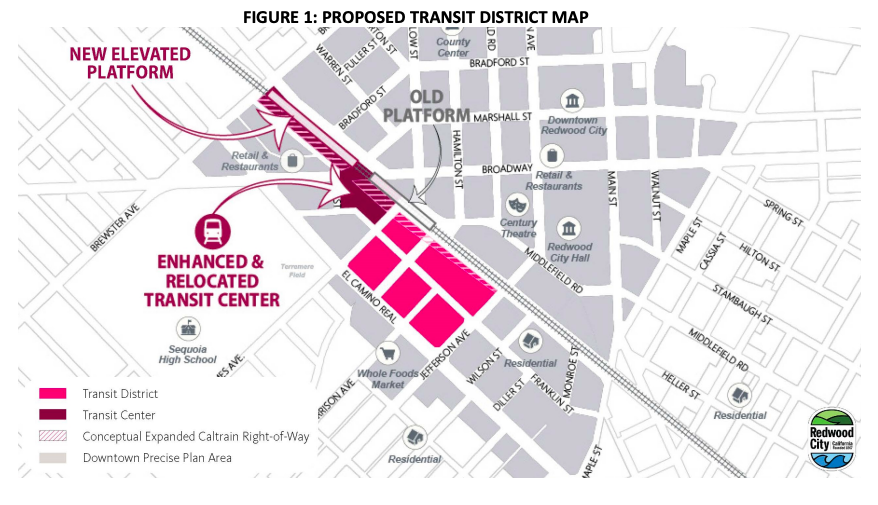 On Tuesday April 5, Redwood City Planning Commission is reviewing an updated version of the city’s plan for the Sequoia station area.  The area has been proposed as the site of a new large mixed-use development that would enable a major improvement to Caltrain corridor rail service – an updated transit center with a 4-track passing station enabling more frequent, regular, easy-to-connect service for the entire line, and grade separations of the streets crossing the Caltrain tracks, allowing easier connections across the Downtown area.

The city’s updated plan would accommodate up to 1.6 million square feet of office space and up to 1100 homes.

The proposed new zoning would accommodate an updated development proposal which the developer Lowes has described as including 1.3 million square feet of office space, 631 homes including 234 dead-restricted affordable homes, as well as 170,000 square feet of retail space retaining the well-used Safeway supermarket and CVS pharmacy, and a 10,000 square foot childcare space.

In the new Transit Center, buses would be moved north under the elevated station on Perry and Arguello streets, allowing for convenient connections, and allowing the land used by the existing bus depot on James Avenue to be redeveloped also.

The area under Sequoia Station along Arguello and Perry could be used for start-up offices, artist spaces, information kiosks, bicycle parking, or services with retail spaces would be focused closer to Broadway.

Parking for a transit-rich area

However, this approach to car parking remains more car-centric than the policy than proposed in AB2097, a bill in the state legislature that would eliminate car parking requirements at sites within a half-mile of transit.

The plan includes a new city street grid in an area that is currently a large parking lot. The plan updates includes changes to the street grid, removing a lane next to the tracks which won’t be needed for bus circulation, and classifying the new Hamilton Street as a 60 foot city street rather than a wider 100 foot downtown core street with a wide landscaped median.

Some Redwood City residents are advocating for Franklin Street, which will be internal to the development, to be designed to be a car-free street for pedestrians and outdoor dining, along the lines of Castro in Mountain View and California Avenue in Palo Alto.

Next steps and transit infrastructure funding

Planning for the updated Transit Center itself, including the new four-track elevated station, the bus area, and the grade separations, is occurring in parallel.  More information is expected to be available  in late April or early may, along with a draft environmental impact report for the plan area.   The final environmental impact report is expected to be reviewed for approval by the Planning Commission and City Council in the fall of this year.

Funding for the major station improvements and grade separations will be essential.  The project was not yet included in the Metropolitan Transportation Commission’s recommendation list for federal funding in April. Staff at the San Mateo County Transportation Authority told us that the project needed to be further along in its environmental review process to be a strong candidate for the federal funding. The project could also potentially be a candidate for the Cap and Trade funding that is available to support transportation infrastructure that benefits affordable housing.